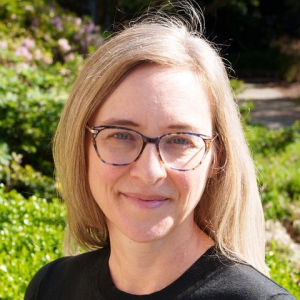 Before coming to Duke, Sarah Pourciau (Ph.D. 2007, Princeton University) held positions at Stanford University, Princeton University, the Technical University of Berlin, and the Leibniz Center for Literary and Cultural Research in Berlin. Her research explores the intersections of philosophy and literature, with an emphasis on nineteenth and twentieth-century German and Austrian culture. Related areas of interest include the history of theology, literary theory and aesthetics, gender theory, opera, and the history of science and mathematics. Her first book, The Writing of Spirit: Soul, System, and the Roots of Language Science (Fordham, 2017), explores the history of system theories in linguistics, poetics, and acoustics from the origins of Germanic philology through the development of structuralism and its aftermath. She is currently working on two book projects. The first, with the working title "The World Suspended: Habsburg Modernity and the Art of Seeing Double," argues for the existence of an unprotestant, supranational alternative to classical modernist problems of aesthetic and political form. This "other modernity," which has its roots in the Habsburg baroque, finds particularly powerful expression in several twentieth-century Austrian attempts to rethink dramatic (Hofmannsthal), operatic (Schoenberg, Berg), and narrative (Musil, Kafka, Broch) unity against the backdrop of imperial dissolution. Pourciau’s second book project expands the system-theoretical concerns of her first book to the history of mathematics and computation. It traces the prehistory of the digital as a problem of how to compute the continuum, and with it the feminine, from German Idealism through contemporary theories of the digital, the biopolitical, and the Anthropocene. Pourciau's articles have appeared or are forthcoming in journals like Critical Inquiry, Modernism/modernity, Deutsche Vierteljahrsschrift, The Opera Quarterly, POETICA, Modern Language Notes, Germanic Review, and Arcadia.