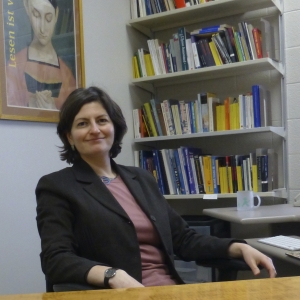 Stefani Engelstein’s research explores German and British literature, philosophy, and the life and human sciences in the eighteenth and nineteenth centuries. Her newest project, Living Things, Human Beings: The Entanglements of the Organism, unites interests in epistemology and anatomy to consider the complicated boundaries of the organism and their implications for social institutions in Romanticism and Idealism.  Engelstein’s most recent book, Sibling Action: The Genealogical Structure of Modernity (Columbia University Press, 2017), investigated the genealogical sciences in the long nineteenth century. Genealogies were developed to organize many historical systems and in the process transformed contemporary terms in such systems – whether languages, races, nations, species, or subjects – into siblings of varying degrees.  As a link between epistemology and affect, the sibling is a key to both knowledge-systems and identity politics that destabilizes genealogies from within.  Engelstein’s first book, Anxious Anatomy: The Conception of the Human Form in Literary and Naturalist Discourse (SUNY, 2008), explored theories of reproduction and healing at the turn of the nineteenth century.  It traced the concept of teleology at the root of the new discipline of biology to reveal its transformation from an explanatory principle in new epigenetic theories of inheritance to a rationalization for legitimating ideologies through the body. Engelstein also co-edited the anthology, ;Contemplating Violence: Critical Studies in Modern German Culture (Rodopi 2011) and her work has appeared in such journals as Critical Inquiry, the PMLA, the German Studies Review, the Goethe Yearbook, and Philosophy Today.