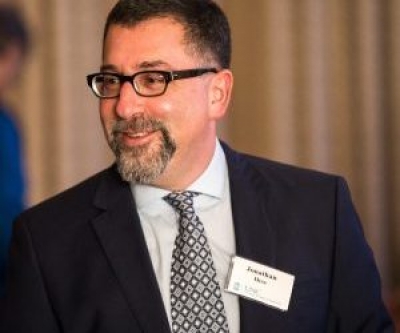 The faculty, staff, and students in the Carolina-Duke Graduate Program in German Studies are profoundly saddened by the sudden and unexpected loss of their beloved colleague and dearest friend Jonathan M. Hess.

A stellar scholar and colleague, a passionate teacher and mentor, and dedicated leader and administrator, Jonathan grew to become the heart of our Program in every sense of the word. His remarkable compassion, dedication, and grace were felt by everyone who had the privilege to work, study, teach, mentor, and research under his guidance.

Jonathan completed two Masters of Arts degrees, one in German from The Johns Hopkins University and another in Comparative Literature and Literary Theory at the University of Pennsylvania where he continued his doctoral studies. Immediately following the completion of his dissertation entitled “Aesthetic States: The Political Investments of Aesthetic Autonomy” in 1993 under the direction of Liliane Weissberg, Jonathan joined the faculty of the then Department of Germanic Languages and Literatures at The University of North Carolina at Chapel Hill. He remained at UNC for the entirety of his esteemed career. When UNC’s German Program and Duke’s Department of Germanic Languages and Literatures began their collaboration as the Carolina-Duke Graduate Program in German Studies, Jonathan took on a central role in this new graduate program as well.

Jonathan was a prolific and internationally renowned scholar of German-Jewish literary cultures of the eighteenth and nineteenth centuries. He is the author of four prize-winning monographs: Reconstituting the Body Politic: Enlightenment, Public Culture and the Invention of Aesthetic Autonomy (Wayne State University Press, 1999), Germans, Jews and the Claims of Modernity (Yale University Press, 2002), Middlebrow Literature and the Making of German-Jewish Identity (Stanford University Press, 2010), Deborah and Her Sisters: How One Nineteenth-Century Melodrama and a Host of Celebrated Actresses Put Judaism on the World Stage (University of Pennsylvania Press, 2018). He also co-edited Literary Studies and the Pursuits of Reading (Camden House, 2012) and Nineteenth-Century Jewish Literature: A Reader (Stanford University Press, 2013). In addition to a dozen chapters in anthologies, he published scholarly articles in journals such as Amsterdamer Beiträge zur neueren Germanistik, Eighteenth-Century Studies, German Quarterly, Jewish Quarterly Review, Jewish Social Studies, New German Critique, Studies in Romanticism, and Transversal: Journal for Jewish Studies.

Besides the popular undergraduate courses he taught in German-Jewish Studies at UNC, Jonathan regularly taught a wide variety of graduate seminars on eighteenth- and nineteenth-century prose and drama, Jewish cultural history, and aesthetic and social theory. His recent seminars included: “Germans, Jews and the Pursuits of Literature, 1749-1918,” “German Culture and the Making of Melodrama, 1750-1850,” and “Theater, Culture and Commerce in 19th-Century Germany.” Jonathan’s legacy continues on in the work of dozens of graduate students who had the privilege to mentor under him.

Jonathan was promoted to full professor in 2003 and appointed the prestigious Moses M. and Hannah L. Malkin Distinguished Professor of Jewish History and Culture in 2006. Jonathan became the director of UNC’s Center for Jewish Studies in 2003 and that same year was also appointed as adjunct faculty in the Department of Religious Studies. In 2016 Jonathan was appointed chair of the Department of Germanic and Slavic Languages and Literatures at UNC and co-chair of our program. The entire Carolina-Duke community knew him for his exemplary service to UNC, the Carolina-Duke Graduate Program in German, and the global community of students and scholars of German and German-Jewish literary cultures. Jonathan regularly attended professional conferences held by the Association for Jewish Studies, the German Studies Association, the Goethe Society of North America, the Leo Baeck Institute, and the Modern Language Association, and he regularly shaped the careers of scholars throughout the United States and abroad by serving as an external reviewer for many peer-reviewed publications and tenure and promotion committees.

We will always admire Jonathan’s zeal for life; his boundless energy; his genuine care for colleagues and students alike; his enthusiasm, generosity, and steadfast guidance; love of family; his humor; and that smile.

We miss Jonathan terribly and keep in our thoughts his wife, Professor Beth Posner of the Law School at the University of North Carolina at Chapel Hill, and their three remarkable daughters.

To honor Jonathan’s commitment to supporting junior scholars and cultivating future faculty leaders, memorial gifts may be made to the Jonathan M. Hess Career Development Term Assistant Professorship in the College at the University of North Carolina at Chapel Hill. The fund will support a term professorship for a tenure-track assistant professor in the fine arts and humanities. Click here to make a contribution to Jonathan’s legacy.

Please also visit the tribute to Jonathan written by our colleagues from Carolina Center for Jewish Studies.

The symposium “Moments of Enlightenment: German Jewish Interactions” will be held April 13-15, 2019 in honor of Jonathan M. Hess. Details of the symposium can be found here.