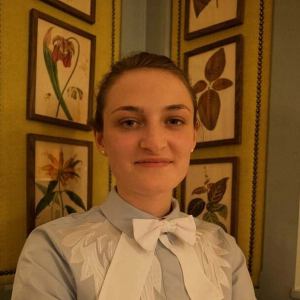 After growing up in Alsace, France, Maya earned her BA in English at King’s College London. During her BA, she spent a semester studying abroad at UC Berkeley, where she majored in Philosophy. She then went on to study French and German literature at the University of Cambridge, earning an MPhil, before concentrating on German and Comparative Literature at the University of Bonn and the University of St Andrews where she earned a joint MA/MLitt. Her research centers around the long 19th century, with a particular emphasis on the Sattelzeit, and is at the intersection of historical discourse, ecocriticism, affect studies and memory studies. She is a James B. Duke Fellow. Outside of her studies and research, she enjoys writing prose, making collages for her friends and family, practicing yoga and swimming.