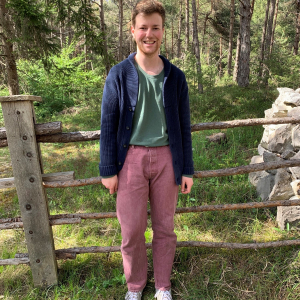 A native Austrian, Luca got his BA in English at Randolph-Macon College in Ashland, VA. He also took classes in German and French which culminated in his capstone project on concepts of natural queerness in Joris-Karl Huysmans Against Nature. In 2020, he published a co-authored paper in Feminist German Studies titled "The Language of Flowers and the (Re)productive Female Body in Hedwig Dohm’s Werde, die Du bist!" Last year, he completed social service at a "Notschlafstelle" for adolescent drug users in Innsbruck, AUT. Luca is interested in Austrian literature, modernism, literary theory, queer ecology, and contemporary literature. In his freetime, he enjoys walking and hiking and making singing videos on snapchat with his little sister.