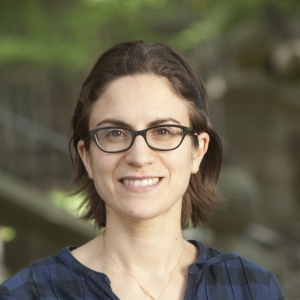 Kata Gellen’s (Ph.D. 2010, Princeton University) main research areas are twentieth-century literature, German-Jewish studies, and film studies. Her work focuses on transformations in perception, narrative form, and linguistic possibility in the literature and film of German-language modernism. Her first book, Kafka and Noise, employs film theoretical ideas about sound to analyze the many unexpected noises, voices, and silences in the writings of Franz Kafka. Her current project, "Once and Future Galicia: Jewish Literary Modernism in Eastern Europe," looks at the role of Galicia, the easternmost region of the former Austro-Hungarian Empire, in the literary works of Joseph Roth (1894-1939) and Soma Morgenstern (1890-1976). A place with great personal meaning and mythic potential for these writers, Galicia allowed them to explore a range of urgent questions about Jewishness, modernity, and tradition—in particular, the role of the East in imagining Jewish futures. Gellen has published articles on Franz Kafka, Joseph Roth, Elias Canetti, Robert Musil, Rainer Maria Rilke, and others, as well as a series of essays on Weimar Cinema. A further area of interest is postwar Austrian literature and film, in particular the writings of Thomas Bernhard and the films of Michael Haneke and Ulrich Seidl.