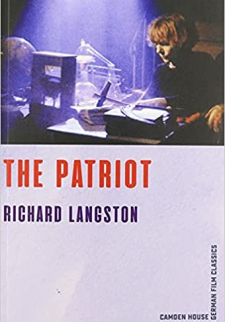 Alexander Kluge achieved his breakthrough at the 1966 Venice Biennale with his first feature, Yesterday Girl (Abschied von gestern), but it is arguably his 1979 film The Patriot (Die Patriotin) that first embodied the great heights his storytelling could reach. Titled after its heroine, the history teacher Gabi Teichert, The Patriot is, however, much more than just a curious story about a headstrong pedagogue intent on teaching kids a version of German history that does not end in war and death: it is one of the finest examples of Kluge's exploration of the poetic force of Frankfurt School Critical Theory. This book pursues The Patriot's conception as a cinematic extension of the theoretical agenda that Kluge and social philosopher Oskar Negt began developing just as the Frankfurt School's first generation was ending. It will guide twenty-first-century English-language readers past superficial interpretations of the film's engagement with German history. By asking how and why The Patriot brings the twin concepts of history and obstinacy - the human propensity to resist capitalism's forces of expropriation and alienation - to the screen, this book revitalizes Kluge's film for the new millennium.