Event date to be determined

Interfacing Literary and Cultural Studies with the Cognitive Sciences, or: Re-cognizing Henry James

The paper evolves from a book project that explores how literary and cultural analysis and cognition research can be mutually productive. Focusing on three central terms of cultural analysis (memory, mediation, seriality) and three authors (Emily Dickinson, Henry James, Gertrude Stein), my study identifies touch points between cultural studies and the cognitive sciences and assesses their potential impact on our sense of cultural practice. Portraiture, close-up, and face recognition, I show in my talk, constitute one such contact point. As we interface the art of portraiture in James’s fiction with the faculty of face recognition and examine remediations of James in recent cultural practices, ranging from cinematic adaptations of his fiction to fictional texts that feature James, it becomes evident how the re-cognition of another (human) figure informs our sense of ourselves as (inter-)subjects.

Dr. Sabine Sielke is Chair of North American Literature and Culture, Director of the North American Studies Program and the German-Canadian Centre, as well as spokesperson of the Zentrum für Kulturwissenschaft/Cultural Studies at the University of Bonn. Her publications include Reading Rape (Princeton UP 2002) and Fashioning the Female Subject (U of Michigan P 1997), 120 essays and book chapters, the series Transcription, and 17 (co-)edited volumes, among them American Studies Today: New Research Agendas (2014). Currently, she is working on nostalgia, ecologies of knowledge, and projects at the crossroads of cultural studies and the sciences.

the event will be followed by a reception 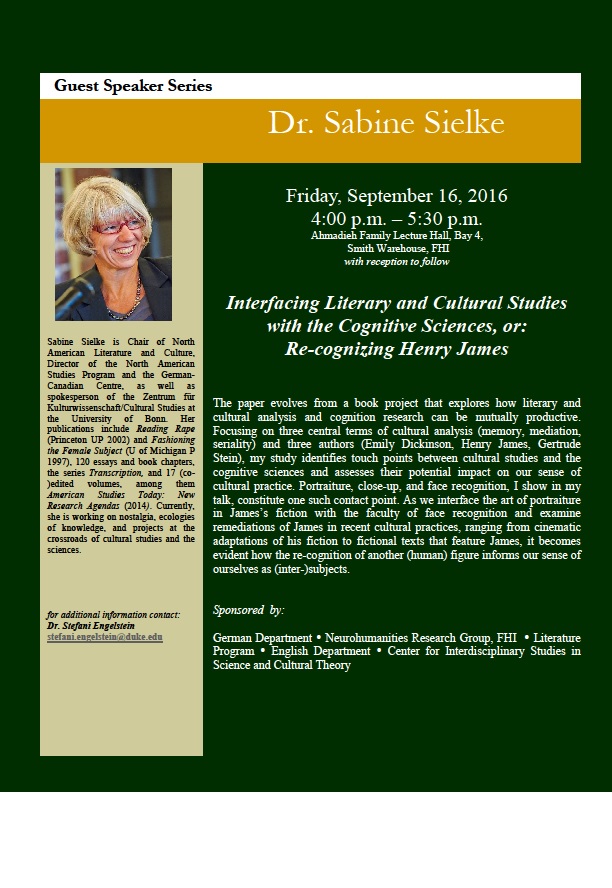