Material Cuts: Scherenschnitte, Collage, and the Romantic Fragment
Catriona MacLeod
with a response by Peter Nisbet

Romantic authors and visual artists cut, glue, stain, and recycle paper in a century that has come to be known as "das papierne Zeitalter." They generate paper cuts, collages, and ink blot poems in profusion, and combine these scraps in what are striking new hybrid forms such as the picture books of Hans Christian Andersen and Justinus Kerner. These material acts of cutting and pasting hardly figure, however, in philosophical discussions of the Romantic fragment, though August Wilhelm Schlegel had commented on the creation of the fragment as a material process of cutting and excerpting. On the other hand, art historical studies of collage have more or less ignored its presence before the early twentieth-century experiments of Dadaism, and refer to earlier practices (for example, Andersen's albums) as "non-art.”  The talk will address several experimental engagements with paper, as well as their literary theorization, that call for a reassessment of their status as diminutive and innocuous craft works.

Catriona MacLeod (Edmund J. and Louise W. Kahn Term Professor of German, UPenn) specializes in Romanticism, 19th-century literature, word and image studies, material culture / object theory, intermediality, and gender studies (among many other topics). She is author of of Embodying Ambiguity: Androgyny and Aesthetics from Winckelmann to Keller (Wayne State UP) and Fugitive Objects: Literature and Sculpture in the German Nineteenth Century, which appeared in 2014 with Northwestern UP and was awarded the Jean-Pierre Barricelli Prize for best book in Romanticism Studies.

Peter Nisbet (Deputy Director for Curatorial Affairs, Ackland Art Museum) received his PhD in the History of Art at Yale University. He has served as the Daimler-Benz Curator of the Busch-Reisinger Museum at the Harvard Art Museum and as the Chief Curator of the Ackland Art Museum at UNC-Chapel Hill. Peter Nisbet is an expert in Russian and German art of the twentieth century and has organized major international exhibitions on European art between the wars. He is the author of several catalogues, among which are: De-Natured, German Art from Joseph Beuys to Martin Kippenberger; The Sketchbooks of George Grosz; German Realist Drawings of the 1920s; and Elegance and Extravagance: Japanese Posters from the Merrill C. Berman Collection.

The workshop will focus on the theorization of the romantic engagement with paper; it will take its point of departure from a text by Varnhagen von Ense and will include a discussion of articles by Catriona MacLeod and Anthony Phelan.

Please rsvp to Gabriel Trop (gtrop@email.unc.edu) should you wish to attend the workshop and receive the readings for the seminar. 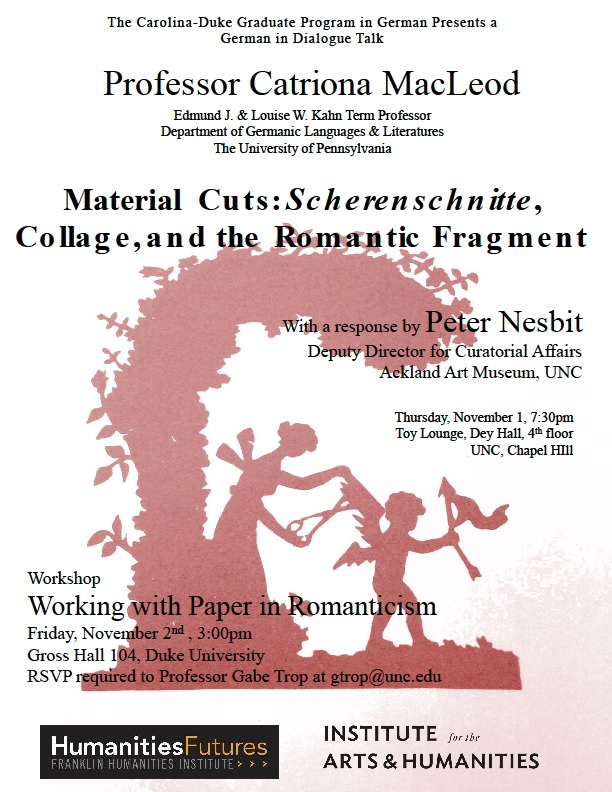